You can find citation data on my ResearcherID page or Google Scholar page.

Our method-oriented research focuses on:

These techniques are applied to several application areas. Furthermore, in interdisciplinary projects the group acts as a bridge to transfer advanced mathematical techniques to real-world problems. Examples include:

Detailed descriptions of selected projects are given below. Student projects can be found here. 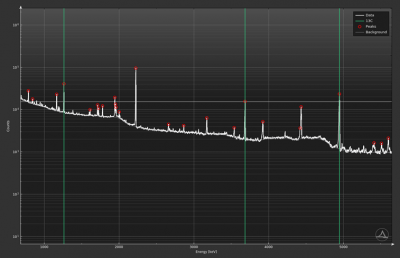 Within the ZEBRA research project, an innovative measurement system is being developed for environmental and hazardous substance analysis. This measurement system is based on the prompt and delayed gamma neutron activation analysis (P&DGNAA). The project includes the construction and test operation of the measurement system and the development of new analytical methods for determining the mass fractions of all elements of the periodic system.

The aim of this project is to develop a novel tool for the simulation of heavy ion beams as they are decelerated in thick targets. We want to characterize the spatial and energy distributions of all primary particles and secondary fragments in a target. This is relevant because ion beams are used in various fields: atomic physics (e.g. atomic collisions, ion capture), nuclear physics (e.g. the study of the structure of nuclei), electronics (e.g. deposition of elements), material science and chemistry (e.g. analysis of damage on the walls of a tokamak), biology (e.g. the study of the toxicology of cellular tissues by ion analysis). Additionally, several world-class facilities are dedicated to these studies (e.g. FAIR in Germany, GANIL in France). Simulations of heavy ion beams are challenging for two main reasons. First, beams are difficult to capture with a grid-based method. Second, the simulations rely on measurements of the stopping power, and therefore must be regarded as uncertain. We therefore develop a new entropy-based discretization scheme which allows both a sub-grid resolution and at the same time a very detailed reconstruction that can capture beams. In addition, we will use a similar method to characterize the uncertainties in the particle distribution due to uncertain stopping powers. The method is computationally challenging but highly parallelizable, and therefore ideally suited for modern computer architectures. 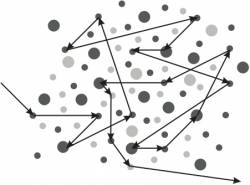 Methods that work well in optically thin media are computationally too expensive in these regimes. Methods that work well in optically thick media, on the other hand, give poor results for low order approximations and have high computational costs if one increases the order. Therefore, in these regimes new methods have to be developed.

These new approximations have to recover traditional reduced models for small mean free paths. Further, in the transition regime, they have to be more accurate than the simplified models and should be solvable more efficiently than the full kinetic approaches. 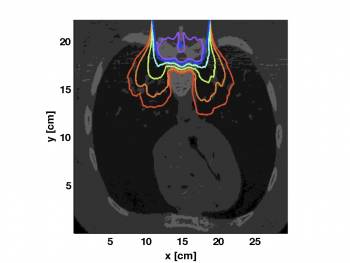 High energy ionizing radiation is a prominent modality for the treatment of many cancers. The approaches to dose calculation can be categorized into semi-empirical models (e.g. Fermi-Eyges, convolution-superposition) and probabilistic methods (e.g. Monte Carlo). A third way to dose calculation has only recently attracted attention in the medical physics community. This approach is based on the deterministic kinetic equations of radiative transfer. In this project, we investigate macroscopic partial differential equation models for particle transport in tissue. The models reduce computational cost, and at the same time preserve key properties of the mesoscopic equation.

Optimal Treatment Planning in Radiotherapy based on Boltzmann Transport Equations

We study optimal control problems modelling clinical external beam radiotherapy. We use the Boltzmann transport equations to model the distribution of radiation through the body. Mathematically, this consists of an integro-partial differential equation which depends on variables in space, energy, and angular direction. Several avenues of investigation are followed. Objective functions which accurately model the response of tumor cells to dose distributions while also describing the clinical requirements for an effective treatment plan will be developed. With these new models, the existence and regularity of the corresponding optimal treatment plans will be studied. Additionally, we pursue the use of moment approximations to the high-dimensional phase space to create efficient numerical schemes for the solution of the optimization problem; the relationship between these approximations and the optimization methods employed will be investigated. Closed-loop control schemes for use in time-dependent 4D radiotherapy will also be developed. Optimal treatment plans will be simulated on real CT-patient data and compared with standard Monte-Carlo methods for the solution of control problems.

Dose distributions in the body are genuinely three-dimensional. Most of the time, they are visualized by two-dimensional slices. In order to compare standard dose calculation results with newly developed deterministic methods, and as a didactical means to explain these new methods, three-dimensional visualizations have been developed in collaboration with the VR group at RWTH Aachen University. Results can be viewed both on desktop computers and on the VR system at AICES. Future developments include the visualization of an optimization process using adjoint information. Data courtesy of the National Library of Medicine Visible Human Project.

In classical particle transport, the probability that a particle interacts with the background medium is proportional to the path length traveled by that particle, and the proportionality constant depends on the density of the medium and on the particle’s energy. This typically leads to an exponential attenuation law, i.e. the particle flux decreases as an exponential function of the path length (Beer-Lambert law). In cloud physics, however, recent experimental studies point toward a non-exponential attenuation law. It has been suggested that spatial correlations between the water droplets (scattering centers) within a cloud could be responsible for this behavior. This hypothesis has sparked a vivid discussion in the recent literature.

In this project, we investigate a nonclassical Boltzmann equation proposed by Larsen. We have rigorously established the convergence of the solution in the diffusion limit. We will develop numerical schemes for the efficient solution of the extended Boltzmann model.

Concentrated solar power systems are systems that use mirrors to concentrate sunlight to heat a fluid. The heated fluid is converted into steam which drives a turbine to generate electrical power.

There exist different types of concentrators. For example, Fresnel reflectors (see figure) are made of many thin, flat mirror strips that concentrate sunlight onto tubes through which a working fluid is pumped. The idea of direct steam generation is to use water as the working fluid.

In this project we consider the flow of water inside an absorber tube. This two-phase flow is modeled as a homogeneous flow. Specifically, the flow is governed by the 1D Euler equations. The influence of solar energy is described by a heat equation which is coupled with the flow. Due to a specific closure relation for the two-phase flow, the system is in a non-conservative form. We will develop a model and numerical schemes to simulate the flow through a realistic network of tubes.

Similar to x-rays, neutrons can be used for imaging. The advantage of fast neutrons with respect to x-rays is their deeper penetration depth into dense materials. This project deals with the development of a compact neutron radiography system, which can be used in addition to existing imaging techniques. The main aplication is the characterization of radioactive waste, but the technology can be used e.g. for electronics recycling, quality control in manufacturing, engine design, among others. In a collaborative project, we develop image reconstruction algorithms based on the radiative transfer equation. The main focus is the correction of diverging beams.

Extinction Photometry for the Characterization of a Multi-Component Aerosol

This project aims at improving measurement techniques for the characterization of the composition of an aerosol. The main goal is to implement, adapt and improve the method of Mie inversion so that physically correct particle size distributions can be obtained from measured spectra automatically without an operator.

Analysis and Numerics of Kinetic-Continuum Coupling

In numerical methods for engineering applications, there are three basic methods which can be applied: either we work with continuum equations (macroscopic level), or with individual particles (microscopic), or as a third approach we use a probability density for the distribution of the particles for which we solve solve a PDE (mesoscopic). Each of the three has its advantages and disadvantages, therefore our approach is to couple them such that in each part of the simulation domain, we apply the best-suited methodology. This requires special analysis of the coupling method itself. Typically this is based on asymptotic approaches which under given restrictions / assumptions tend to the desired set of equations on the other side of the coupling interface. These assumptions have to be matched with the properties of the numerical schemes. Special focus will be put on the coupling of the Lattice Boltzmann method with linearized Euler equations for aero-acoustic simulation.

Modeling projects are ideal ways to teach problem solving capabilities. Students are faced with a real-world problem that is not formulated in the language of Mathematics. In order to translate the problem, it is neccessary to read literature from other disciplines. Each group of students learns Mathematics by doing it. The project aims can be adapted to the group’s capabilities so that weaker students gain motivation by solving easier problems, while stronger students can be challenged by more complicated additional questions. Problem-solving skills can be assessed by industrial case studies in the final year. The students are confronted with a real problem, have to do research, have to work in a team and in the end have to present their results in a comprehensible way. To facilitate problem-based learning, I have co-founded the education lab CAMMP (Computational and Mathematical Modeling Program) at RWTH Aachen. Our activities in Karlsruhe can be found here.

I have advised or co-advised the following PhD students, in chronological order of graduation: