The second stage of the research high performance computer ForHLR was built together with a new computer building and a new visualization room. On March 4, 2016 the system was put into operation by Baden-Württemberg's Science Minister Theresia Bauer and the President of the KIT, Holger Hanselka, during a ceremony with colloquium.

The high-performance computer ForHLR II enables scientists from all over Germany to work on complex application
problems. It ranks as a parallel computer of performance class 2 below the systems of the national supercomputer centres
and above the university cluster systems and is therefore suitable for application problems based on processor numbers from the middle 3-digit and in the 4-digit range. 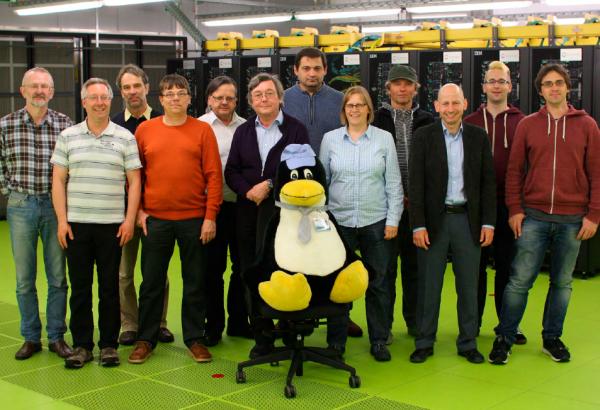 Operational team of the ForHLR II in 2016

For the visualization of simulation results and data, rendering nodes and projection rooms are available at Campus North at the SCC
at your disposal. For method research and tool development there are special visualization computers and various special devices
like 3D scanners at the IVD.